Areas with risk of the Zika Virus

The Zika Virus: What It Is, Symptoms, Causes, And More

Mosquito-borne diseases pose a threat to millions of people, causing them to become infected with viruses, bacteria, and parasites. Not all mosquitoes transmit diseases to humans, and these diseases are often more common in specific regions of the world. Understanding these different mosquito-borne diseases, including how to recognize their symptoms and how to identify the risk while travelling, is an important protocol in the reduction of their widespread prevalence.

Here, we will focus on the Zika virus. This disease has recently received attention due to frequent outbreaks. The most recent outbreak was in Brazil. We will consider the risk factors, as well as the signs of symptoms of this viral infection. Furthermore, we will also take a look at how the disease is diagnosed and what type of treatments are available to help prevent complications.

What Is The Zika Virus?

The Zika Virus, often also referred to as Zika Fever, is a viral infectious disease. The disease has become somewhat common in certain areas of the world, and we often find reports regarding outbreaks in certain parts of the world. The disease does not cause severe symptoms in those affected by the virus. In fact, most people infected with the virus will not know that they have been affected. The primary concern regarding this virus is the dreadful complications that can occur in pregnant women, as the virus can transmit from the mother to the fetus. In some rare cases, the nervous system of the individual infected with the virus may also be affected.

How Does The Zika Virus Spread?

The Zika Virus is primarily considered a mosquito-borne disease, which means the main method of transmission is through the bite of an infected mosquito. The Aedes mosquito species are known to transmit this particular virus – two specific types, in particular, including the Ae. albopictus and the Ae. Aegypti.

Donors can also transmit the virus to other people if they have been infected with the virus. The virus may be present in their semen, tissue, blood, cells and even their organs.

Another important method of transmission that should be noted is in pregnant women. When a woman is pregnant while she is infected with the Zika virus, then she can transmit the virus to the unborn baby.

The Zika virus can be present in seminal fluids of a man that has been infected for a period of six months. The virus can also remain active in blood for up to one week.

What Are The Signs And Symptoms Of The Zika Virus?

A particular problem being faced with the Zika viral infection is that it does not cause symptoms in many patients who are infected. There are still, however, some patients who may experience some symptoms following exposure to the virus. In the majority of cases, these symptoms will be very mild. If symptoms will be present, then the patient will usually experience these within the first week after they are exposed to the virus. The incubation time of the virus is around to days to one week.

The most common symptoms that may develop when infected with the Zika virus include a mild fever, as well as a rash. Patients are also likely to experience muscle pain and sore joints. In rarer cases, the patient may experience a headache. Conjunctivitis, a condition where the eyes become red, may also occur. 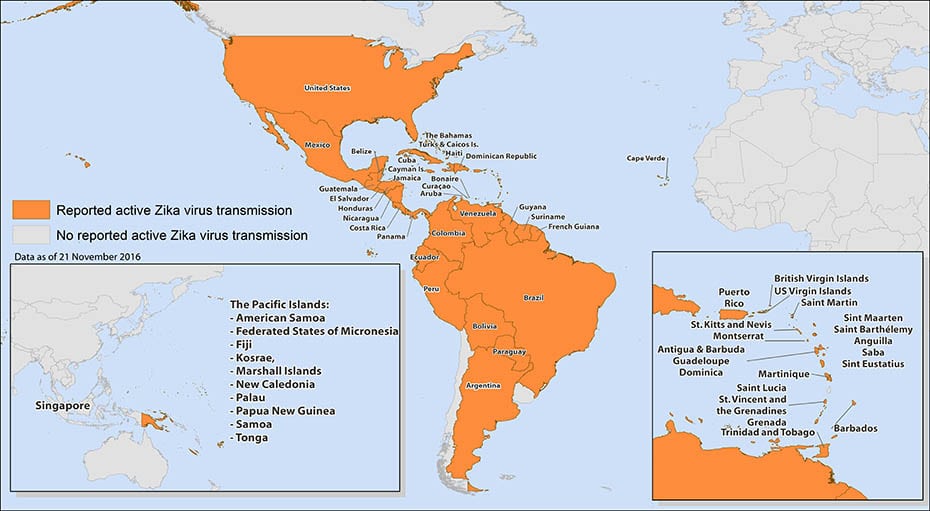 What Complications Can The Zika Virus Cause?

The concern about the widespread prevalence of the Zika viral infection in some areas of the world is not due to the symptoms that the infection causes, but rather because of the complications associated with the disease. The two main complications include microcephaly and Guillain-Barre Syndrome.

Microcephaly may occur when a pregnant woman is infected with the Zika virus. The virus is transmitted to the developing baby, which then causes defects in their growth. In turn, the baby is born with an abnormally small head.

How Is The Zika Virus Diagnosed?

The symptoms that are associated with the Zika virus are similar to those that are caused by other types of mosquito-borne diseases. For this reason, it is important for a patient to undergo the appropriate tests in order to help a physician identify the cause behind their symptoms. Even when no symptoms are experienced, patients are still advised to undergo appropriate tests if they suspect they might have been bitten by an infected mosquito.

A physical examination alone would not be sufficient to diagnose a patient with this disease. The physician will have to order specific types of tests on either a blood sample or a urine sample from the patient. A laboratory test on such a sample can help to confirm whether the Zika virus is present in the patient’s system. The same samples can be used to identify the presence of other mosquito-borne diseases in the patient’s body. Appropriate testing for the Zika virus is especially important for pregnant women who might have been exposed to the virus after visiting a country where the prevalence of the disease is more common.

What Treatments Are Available For Zika?

No treatment options have been identified or developed specifically for the Zika viral infection. If the patient experience symptoms, then the treatment provided to the patient will mainly focus on relieving the symptoms, they are experiencing. This may include the use of certain medications, such as acetaminophen, to assist in alleviating the pain they are experiencing, as well as to relieve their fever. NSAIDs and aspirin should not be provided to the patient before they have undergone appropriate testing to rule out the possibility of other mosquito-borne diseases, such as dengue.

The patient will also be advised to drink a lot of fluids and to rest up. This will help to improve the recovery time.

Can The Zika Virus Be Prevented?

Due to the possible complications that the Zika virus can cause, individuals who may be at risk of exposure to the virus should ensure they obtain the appropriate vaccine before they travel to a high-risk location.

According to the National Institutes of Health, a safe and effective immunogenic vaccine has been developed to immunize people against the virus that causes this disease.

It should also be noted that once a person has been infected with this virus, their immune system will be able to fight off the virus should they be exposed to it again in the future.

Where Is The Virus A Concern?

The World Health Organization declared the Zika virus a public health emergency two years ago, in February 2016. The rise in the prevalence of the disease started to occur in December 2015, when a large part of Southern America was affected. The virus continued to spread throughout the United States and, soon, Asia also started to report outbreaks of the disease.

Fortunately, the epidemic that the Zika virus posed in the United States has been brought under control by now. There are, however, still many areas where travellers would be at risk of being infected with the virus.

A total of 30 areas in Africa have been declared at-risk regions, including Angola, Liberia, Nigeria, Cape Verde, Guinea, and the Central African Republic.

Zika is a virus that has received attention recently due to relatively frequent outbreaks. Symptoms are uncommon, but when they do occur, a patient will usually only experience mild reactions to the infection. The concern lies in pregnant women, whose unborn babies may be affected and born with brain defects. Understanding where the disease is considered a risk is important, as this would allow travellers to obtain the appropriate vaccine, reducing their risk of being infected with the Zika virus during their travels.

Symptoms associated with the Zika viral infection can mimic those of other mosquito-borne diseases, which makes an official diagnosis a vital part of the treatment approach. While no treatment methods have been developed for the Zika virus, supportive care and certain pharmaceuticals may help to reduce the symptoms.